Graphic Scores and the Power Interplay of the Composer and Performer in Constructing Experience.

The graphic score is something that creeps to the back of our conscious and subconscious understanding of a special language sign system we have been educated into, of which many of us take for granted the knowledge of what a treble clef does, or what is signified by the five-line staff on a traditional music sheet. However, to what extend does this traditional and modern notation serve the composer and the interpreter of a music score and what is not communicated beyond the lines of a music sheet in this composer-performer relation? While music notation has evolved historically from different points of interests, like Ancient Greece, the Byzantine Empire, and Early Europe to name a few, sound artists in the 1950’s and onwards, questioned the traditions of music notation that privies a typically Eurocentric, Western understanding to music, and the knowledge that is read from it in a structuralist and post-structuralist praxis, where control and power lies in the composer-performer relation.

The breakdown of the graphic score which implodes on itself in the 1950’s signifies the need to address the constraints of the modern music notation, with the personalized explorations into experimental notation that carries the kinks and neurological happenings of each composer to dictate the direction with which the interpreter — who thus performs the score —  musical notation becomes understood as a partial language into the mind and instruction of the composer. But much like Roland Barthes concludes in his examination of the role of the author in modern text through the influential essay “Death of the Author”, one can argue that the power lies in the reader, who is the performer in a sense of aural outputs. Traditional notation prior was understood as a methodology to allow for, and achieve an almost perfect reproduction of a compositional score, which is itself contingent on the abilities and interpretation of the performer. The breakdown of traditional music notation in the mid-20th century allowed for the liberation of the performer who had the choice to ignore specific musical signifiers at will, but also relied on the contexts of knowledge and subjective experience unique to each performer. In this instance, the performer’s context comes into focus when one centres on the performance of a piece versus the set of instructions and the intent of the composer imposed on the music score onwards. This liberation of the performer, also serves as a liberation for the composer who can view the score as a set of instructions to be signified beyond an acoustic reproduction through performance, in which the composer is able to embark on instructional experiences of sound, event, and experience to occur within the performer themselves. In this case, the art object is indeterminant and becomes more about the occurrence of art and experience when executed by the performer. This approach of performance and event scores coincides with the explorations of graphic scores to music, altogether becoming an ongoing, historical dialogue into the power interplay of the composer-performer, in which the performer is liberated yet also becomes a collaborative agent in the performance of a music score.

Traditional music notation functions as a sign system to represent the aural perception of sound both by man-made and vocal instruments of the human body. Typically, we are familiar with the 5-lined lattice staff system where various symbols score and dance across music sheet at modulating heights and frequencies. The symbols are then transformed into different graphic notes and rests, which take up varying parameters of duration, interval, and pitch. The western musical paradigm essentially saw the score as “constitute[ing] the musical object par excellence” (DiPiero 213). However, an exploration into the histories of music notation demonstrates the narrowed glimpse and grasp into the understanding of sound instructions and how the breadth with which music comes into knowledge through diverse cultural histories becomes myopically limited through the dominance of the canonically Western narrative of traditional music notation. Post-war artists like John Cage, the influential group from the New York School of Music, and Robert Cardew began to critique the legacy of this Western musical narrative through the movement of Indeterminacy in the 1950’s. The adoption of Indeterminacy as a sound praxis also aimed to address the limitations inherited in traditional music notation, but also allows for the speculative possibilities into what can be represented and thus performed. The Indeterminacy movement by sound artists sought to  address the ways in which traditional notation was lacking: such as how neumatic notation only demonstrated melody, or the difficult task of representing pentatonic notations. Cage describes a tenet of Indeterminancy as the “ability of a piece to be performed in substantially different ways” which signifies a shift in the power and control of the composer who reinforces these sign notation systems, to the plurality of possibility and performance brought forth by the performer (Pritchett 108). Nevertheless, it is also important to recognize that the notation of sound whether western or not, is not the ideologically motivated notation of sound itself, but the perceived and imperfect visual representation on the structure of sound and how one can perform it based on these instructions. 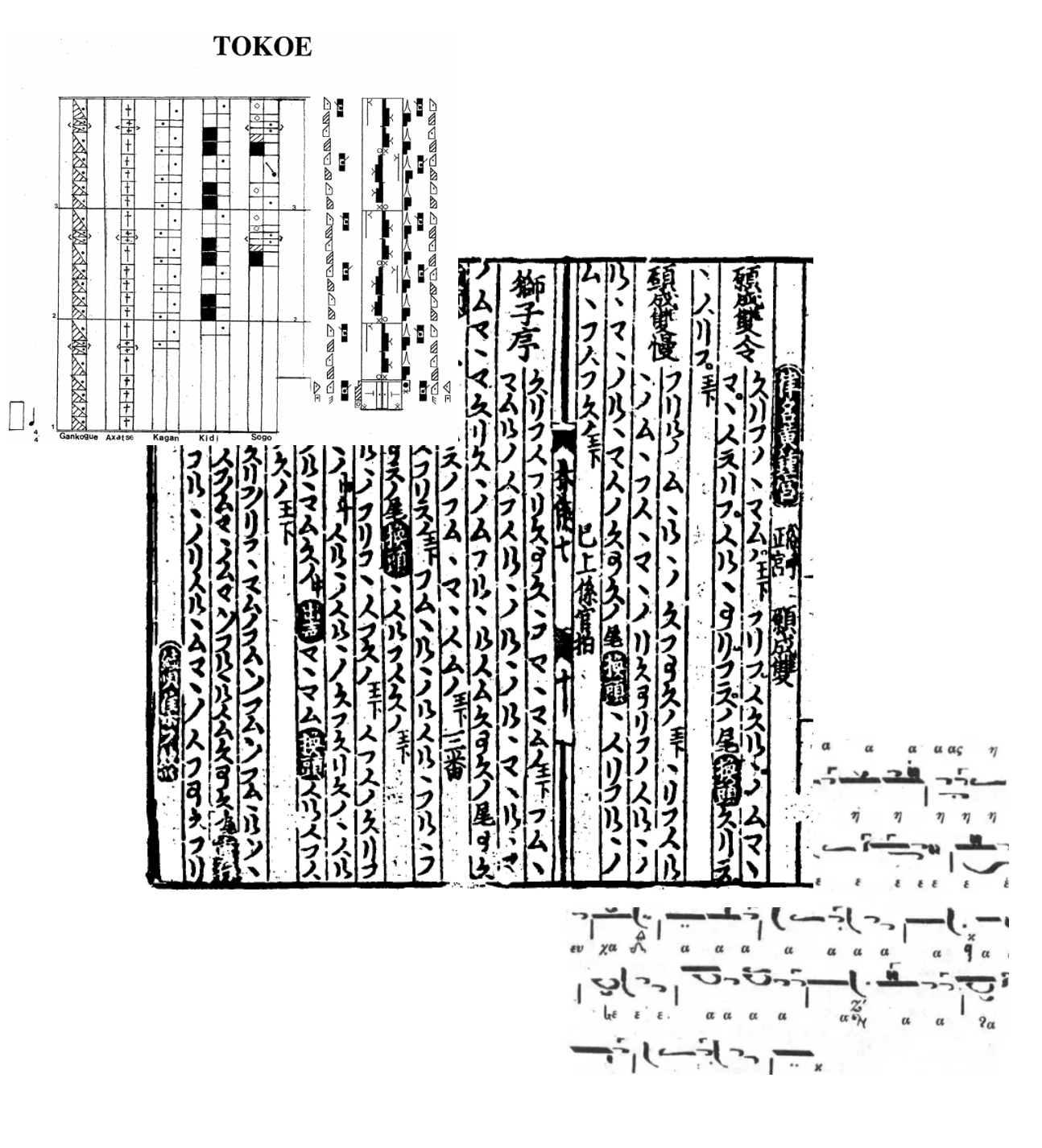 The adoption of Indeterminacy or chance music in from 1960 to 1970, saw the explosion of graphical scores which spanned visual representations from scribbles, to organic lines, to grid boxes, each ambiguous to the outside eye, but a legitimate system adapted to the needs of notation in the perceived structure of sound based on each composer’s context. Early indeterminate scores by Cage, Wolff, or Cardew’s notable Treaties still demanded “considerable technical expertise in performance” (Nyman 110). Furthermore, while Cage valued Indeterminacy as a way to appreciate the performance both in its singularity and multiplicity in how a score can be performed, many of the performers who worked with them were sophisticated in their understanding and ability to unriddle these often complex notational systems from years of experience working closely together, in which they gained a rare window into the idiosyncrasies of the composer. By these parameters, it is the composer who was emancipated from the traditional musical score graphically and structurally — not the performer — who has to decode an even more niche visual representations of sound in order to bring the performance to existence. Thus, the power structure of the composer-performance is still reinforced in this early, indeterminate dynamic. Eventually, a shift in the burden and responsibility to the score occurs, where sound artists and composers begin to adopt a more aleatoric approach to music, in which some compositional decisions of how to perform a perceived sound is left up to the whims of the performer. Composers relinquished some control of their works, while performers were legitimized in the contexts and subjective knowledge they brought in their interpretations, in turn allowing for a true emphasis in the indeterminacy of chance performance in practice. For example, sound artists like Ichiyanagi adapted to a more aleatoric score; demonstrated in Ichiyanagi’s Sapporo, the composer sought to allow performers to listen to a sound produced in by another performer in the piece, who can chose to play continuously while listening or not to. Experimental notation works in graphical markers that denoted spaces for improvisation for the interpreter/performer. Eventually the power and gateway into who gets to be a performer of music and art becomes addressed as artists begin to critique various disciplines of art as a legacy that serve select elites but doesn’t speak to the experience of the commonplace individual like you and me. 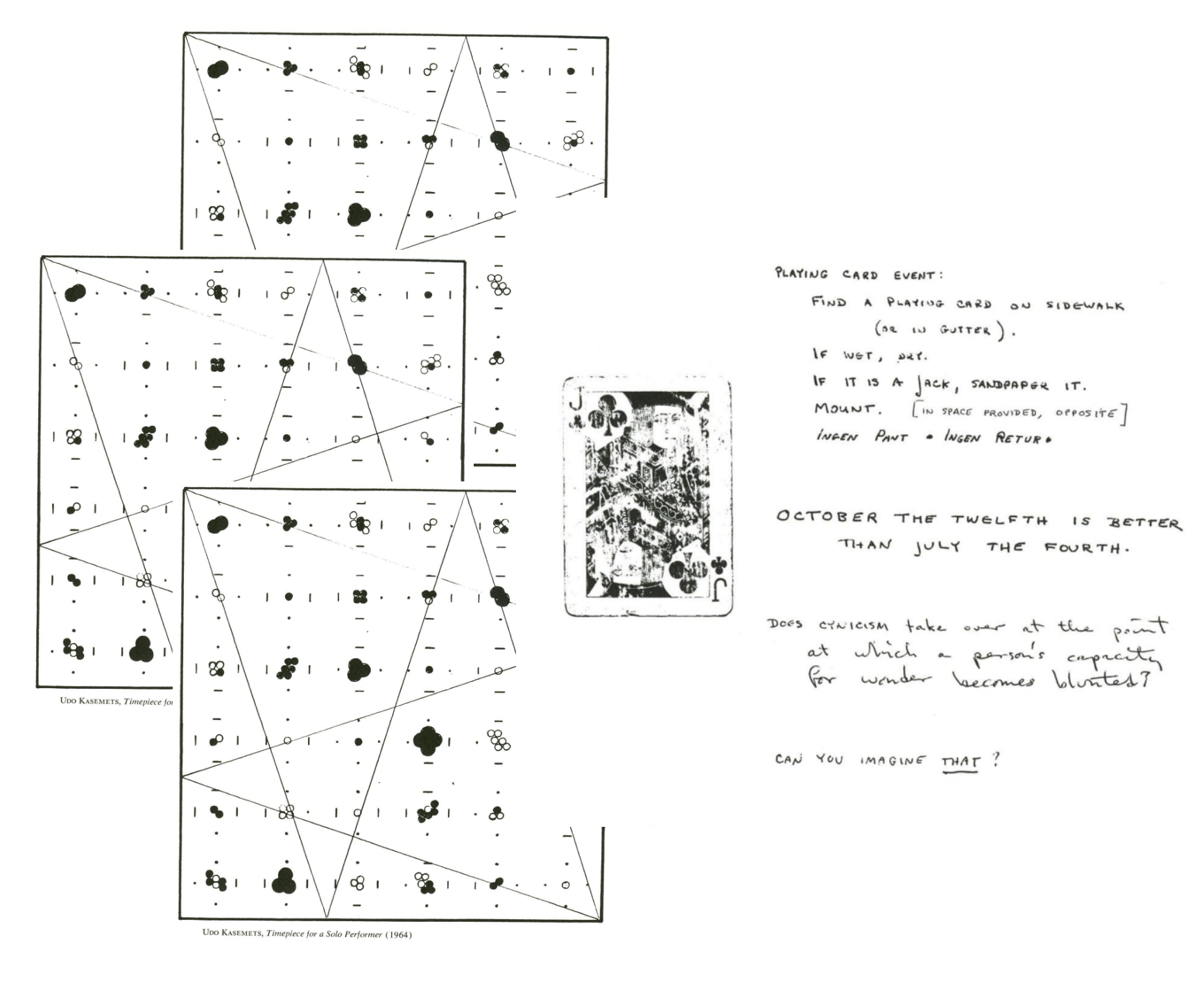 The rise of event scores signified another consequential shift in the idea of the performance and the experience of sound by who performs it. The Fluxus group of interdisciplinary artists, take the critiques of sound addressed by Cage and amplified them full throttle. What works in Fluxus is that their art practice allows for “flexible variables” which can be receptables of self-reflexivity allowing a fluid critique of themselves as artists (Smith 49). This rejection of “governing modes of musical practice” addresses a shift of the sound artist and composer as an authority of music and sound (Smith 49). Fluxus recognized that “aesthetics has its own politics” and aimed to be create anti-art experiences that were not downwardly referential but a gifting of experience through instructional and event scores aiming to create an event in which the art-object is not one of concrete, tangible creation but one that is a phenomenon occurring internally within the performer of the instructions (DiPiero 210). George Brecht’s Five Events or Yoko Ono’s Grapefruit make use of this approach which views the art-object as an indeterminant experience of being in the world tickled by the conductor of the instructions. It is still indeterminant because each performer has their own valid and varied responses to their instructional scores and are always governed by choice. Subjects in relation to objects and environments, are all agents in flux that modulate textual scores, performing bodies, and sonic materializations (DiPiero 214). Many of Fluxus work attempted to engage a public to take on a score to be improvised in order to animate a new formation of community. Thus, there becomes a shift in the score and its signifying capacity as a historical tool, to one of aesthetic contemplations, to one of polemic discourse that sees an engagement of the public. 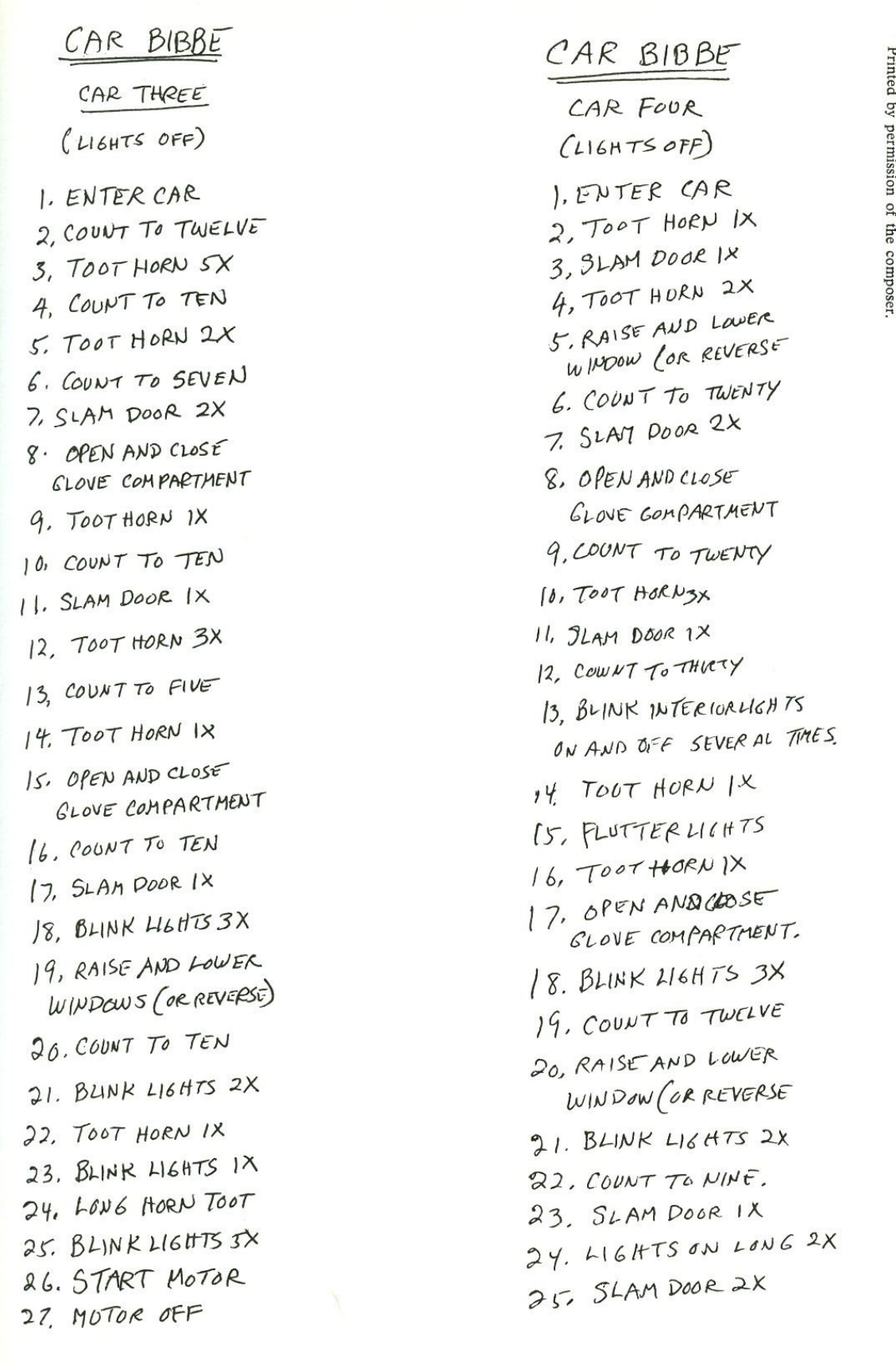 Overall, scores continue to take on varying guises, especially with the permeance of digital processing in sound and electronic reproductions of the aural experience. Black MIDI notations and collaborative scores through information communicating technologies find improvisation and speculation to what a score can be. While the score went through many permutations and destructions as a point of contention between the performer and the composer, what lives on is an attempt to share an experience through a set of arbitrary lines, clefs, and notes. As George Brecht instructs in Event Score: 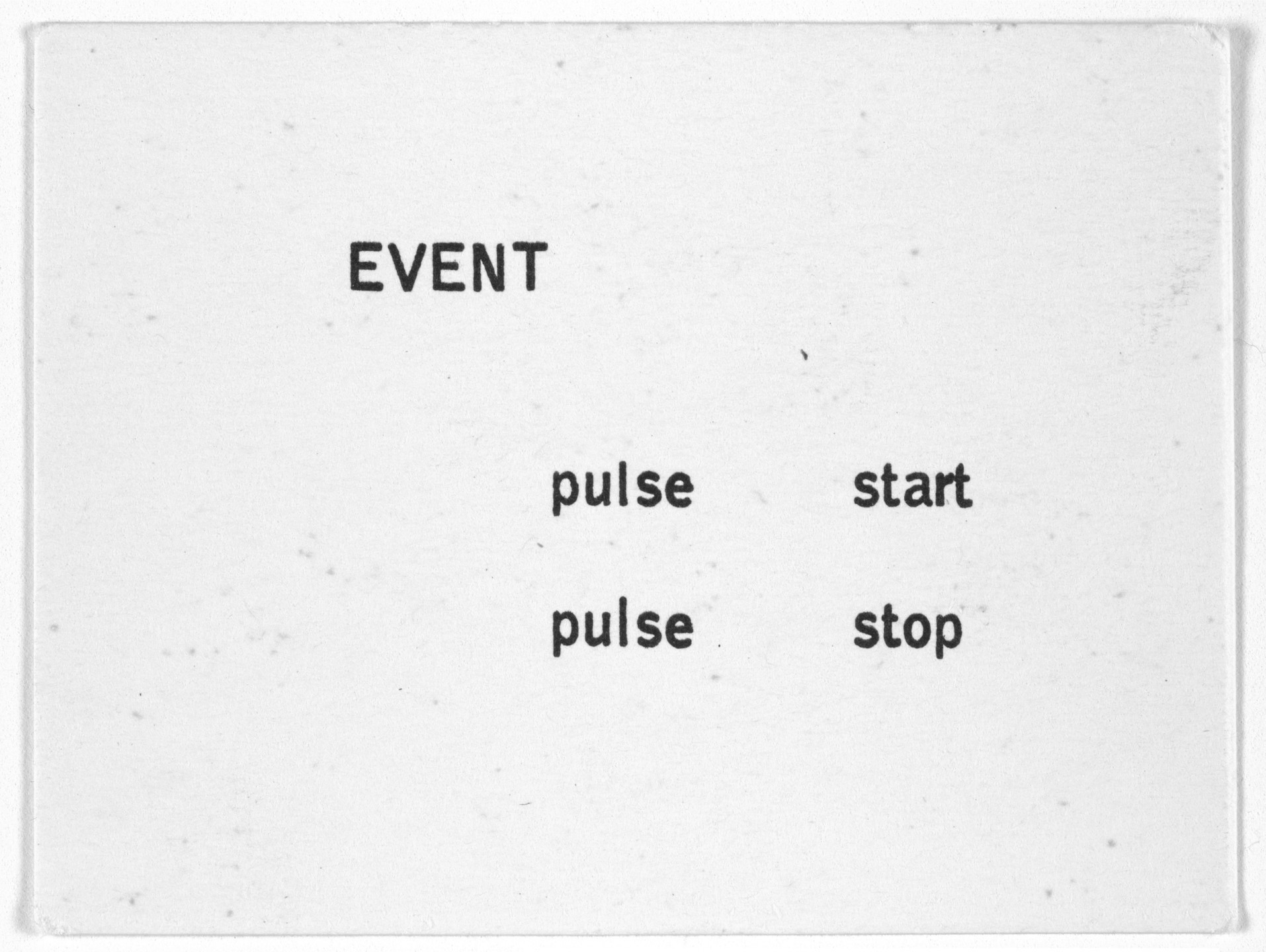 In an attempt to be the performer and interpreter of a score, I tried performing a piece based on reading Toshi Ichiyanagi's score The Field using a midi controller with some basic synths.